We humans have a profound impact on the planet Earth which can be explained with fairly easy linear equation with three main variables. The formula depicted below is called the IPAT equation and was thought up by Barry Commoner, Paul R. Ehrlich and John Holdren. The formula only describes the main problems we are facing it cannot describe the complexity of the situation or solution needed.

The formula is made up out of the following variables:

I:    Impact is the collection name for the effect we have on the Earth, this can be in the shape of energy consumption, material use, water and food consumption. The factor cannot be defined as a specific number but will increase as the variables on the other side of the equation increase and that is the idea behind this formula, not to calculate precisely but to understand the problem.

P:    Population is a clearly defined variable and over the past years is only going up. In January 2012 the seven billion marker was reached for people on earth.

A:    Affluence stands for everything we consume per person on earth, which for someone in Europe comes down to a lot, for instance; electricity, gasoline, natural gas, water, food, products, gadgets and many, many more. Affluence is also going up as more and more countries want to develop to western stander, where almost every family owns a car, refrigerator, microwave oven and so on.

T:    Technology is the efficiency factor in this formula, if technology allows us to produce energy or products more efficient it will have a positive impact on the total impact. A good example of more efficient technology is renewable energy production. Unfortunately technology is only a small number in the formula and improvements are measured in percentages or less.

If we fill in the equation we can clearly see where the main problem lies for the coming future. Population (P) is increasing rapidly as is affluence (A) or consumption per person. Only technology (T) is attempting to balance out the two main forces of population and affluence. 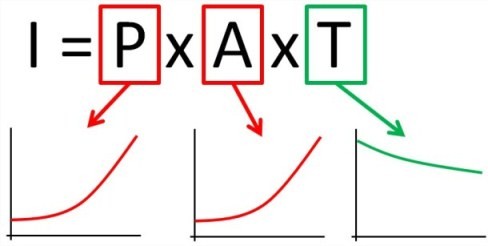 Improvements in efficiency are of much slower pace than increase in population and affluence, resulting in an increase of impact (I) on the planet. The result of the formula is clearly in disfavor of our society and the Earth’s capability of sustaining us. If we continue with this trend we face an unclear and probably troubled future.

The formula also can indicate why the change to a sustainable society is so difficult. The most important factors in the formula are very difficult to change and the factor we can change substantially has only a small effect on the total impact. 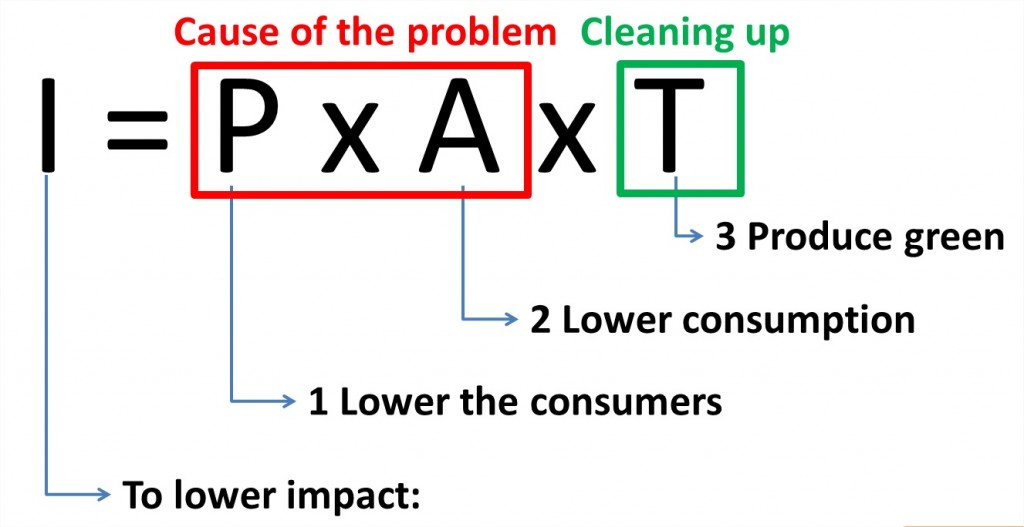 Some day if not soon we will have to look to the cause of our problem and not only try to combat the effects. It’s like cleaning the water coming from a leak in the water main without closing the leak first. To lower impact and be able to live sustainable and in balance with nature we cannot do with only treating the effects we have to tackle the cause as well, which means hard decisions that politicians are not eager to make, which is very understandable but key in the solution.