We use huge amounts of fossil fuels each day and this so called energy addiction is still growing every year with around 1.5% (EIA Outlook, 2009). The total worldwide consumption of energy has grown from 3766.9 million tons (metric tons) of oil equivalent (Mtoe) in 1965 to 11535.7 Mtoe in 2010 (BP statistical review, 2011), which is an increase of over 300% in only 45 year. Fossil sources still dominate the energy market accounting for over 80% of all energy used in the world (EIA Outlook, 2009). We could assume that this increase in energy use is mainly caused by the development of the first world countries, but in this new decade the second generation of countries like china and India are also developing towards the standard of living people in the west now have, meaning that there is no end in sight regarding growth in energy consumption as the projections of the International Energy Agency also predict. 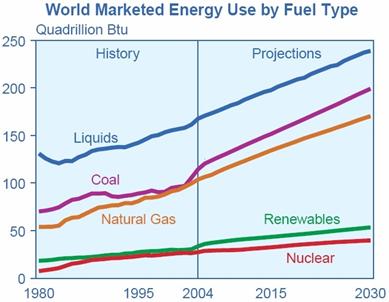 The global change problem and the greenhouse effect might be debated, the energy crises on the other hand is real. Population and consumption per capita is growing and along with it energy demand is growing. Energy is crucial in our society replacements have to be found for our main source of energy before they run out or our current society might collapse into economic crises.