With our growing population also in the future we need to produce more food to sustain us, as can be seen in the picture below. Here the estimation is the need for almost an additional doubling of the world wide food production in the coming 30 years. Good use of current arable land, smart use of fertilizers and crop selection or even genetic modification can further increase crop yields. But will it be enough? 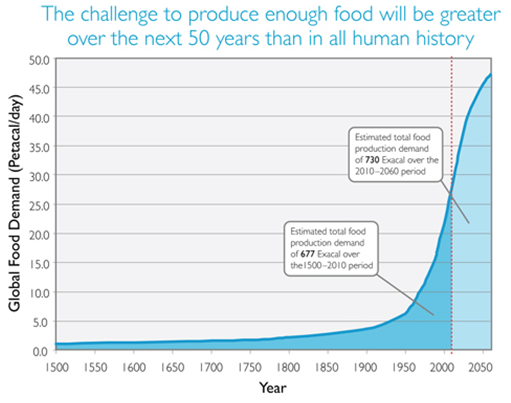 Then there is the problem of our finite world, we only have a set amount of arable land available. When used incorrectly we can use this land to desertification, acidification, and salinification. Overall we need to make strong decisions in the coming future regarding our food sector, as can be seen in the picture below. 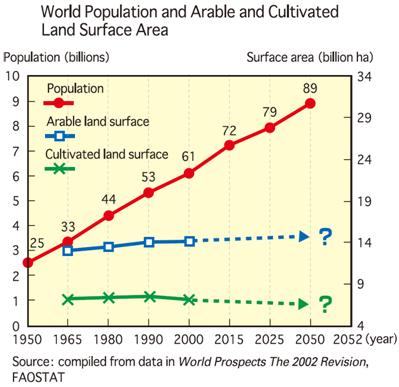 In the table below you see an estimate of the total increase of food demand per continent in the coming years leading up to 2050. The increase is twofold; first, there is the population growth; and second, there is the increase in food consumption per person. For instance in China population is on the rise, but also consumption of meat is on the rise, resulting in an increase of overall food production per person. Overall, the estimate is an increase of twice the food consumed in the year 1995.

There could be different scenarios on the future regarding our food, but also our other resources like water or metals and not to forget our fossil energy sources. In the figure below there is a scenario laid out called overshoot. In this scenario when we reach the carrying capacity of the earth regarding for instance food, we do not emidiatly notice this, however to provide our demand we sacrifice carrying capacity and other fossil resources, up to a curtain point. After this point demand drops sharply as there are not enough supplies being produced. Two of the main drivers for this scenario are our increasing population and demand for food. The only question remaining is: Where are we on this line? And can we still prevent overshoot and collapse? 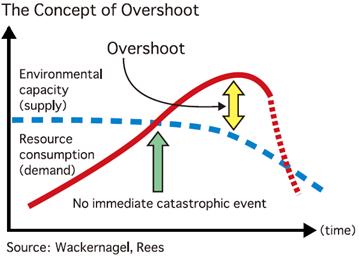