Increase in energy use

The increase in energy consumption of the entire world over the last four hundred years can be clearly seen in the graph below. Fossil energy sources clearly offer a very large source of energy that could never be supplied (then) by the natural resources the sun and plants. The first fossil fuel used in large quantity was coal, probably first to replace dwindling supplies of wood and later on the power the full expansion of the industrial revolution. Oil quickly followed up and surpassed coal as a more versatile and flexible fossil fuel use, followed sharply by natural gas. Coal is still very venerable in is increasing again after the discovery of oil, this is caused by the increased electrification and higher demand for electricity. Hydroelectric power started early in fossil history but supply of suitable locations are in short supply leaving it near the bottom of the graph along with wood, which still is an important fuel source in many countries (especially third world countries). In the sixties nuclear energy was perfected for commercial use and production rose quickly as many countries needed plutonium a byproduct of nuclear energy production for their nuclear arsenal. Unlike petroleum use nuclear is growing less steep near the end as disadvantages of the technique started to show.

The second picture shows the share of the fuel type in the total energy consumption share. In the beginning of the eighteenth century the fuel source was mainly wood and animal feed (straw and grasses), in the nineteenth century this changed to almost predominately coal near the end of the century and in the twentieth century oil and gas took over as main fossil fuel sources. Also in the graph is electricity which is not a energy source but energy carrier, meaning that it is produced out of another fuel source mainly coal. 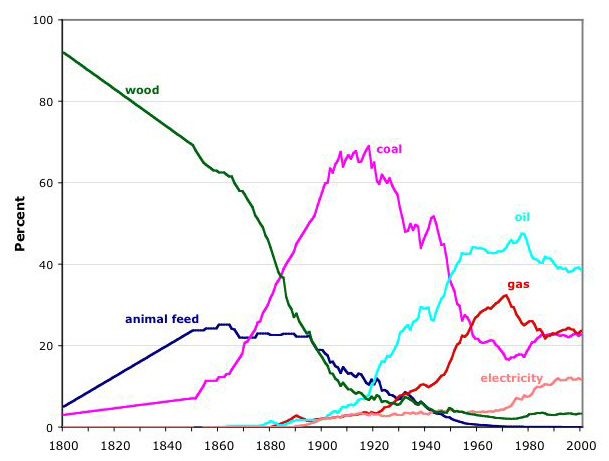