Fossil fuels are millions of years old and formed from organic materials such as plants and animals living in the sea or on land. The natural of fossil fuel production still continuous to this day, as of now unfinished deposits called shale’s are also becoming interesting sources of energy as technology allows us to extract them. The natural process of fossil production occurs very slowly taking millions of years, meaning that we consume them in a much faster rate than they are produced naturally, simply waiting for the resources to reform naturally is not an option.

Oil and Natural gas
Most of the oil and natural gas type fossil fuel is thought to originate from planktons that settled on the bottom of lakes or the oceans. This organic mixed with mud at the bottom and over many years became buried by new layers that exert a lot of pressure on the organic layer. The resulting high levels of heat and pressure caused the organic matter to chemically alter, first into a waxy material known as kerogen which is found in oil shales and then with more heat into liquid and gaseous hydrocarbons in a process known as catagenesis or coal, oil or natural gas. We will have to be careful with our oil and natural gas supply, because once we run out it will take millions of years to reform again.

Numbers in picture
1.    Millions of years ago tiny animals and plants like plankton died and collected on the ocean floor. Over time a layer of silt and sand covered the dead animals.
2.    Over millions of years more layers of sediment covered the dead animals, slowly raising the pressure and temperature. At enormous pressures and temperatures the dead animal material transformed in to crude oil and gas.
3.    At the present day we drill down to these ancient layers to collect the dead converted animals to the surface.

It is very important for the oil and gas to get trapped in so called cap rock, which is impermeable for oil and gas. This cap rock ensures that the oil stays in the same location up to the moment it is removed by human intervention. Oil and gas usually travel to the top of domes in this cap rock. An often forgotten ingredients that makes this possible is a permeable rock layer where gas and oil can travel trough to collect in such a dome. Also always present in these domes is plain water found on the bottom due to the fact it has a higher density than oil and gas.

Coal and peat
Coal is the youngest of fuel sources when looking at oil, natural gas and coal. Like oil and gas it is formed through a process that involves organic matter like plants and dead animals, a bacterial conversion, encapsulation, very high pressure and millions of years. The extremely long process needed to form coal makes it part of the fossil fuel family. The base of coal is believed to be swamp like areas. Once in a wile this swamp area gets flooded by the sea burying the plants in a layer of peat. If the flooding repeats itself, the peat will be buried by ever more layers of new peat, this will increase the pressure and the heat in the lower levels of the peat, triggering a bacterial change in the peat transforming it in to coal. Coal is mostly made up out of carbon, this makes it the most polluting fuel when looking to the greenhouse problem. 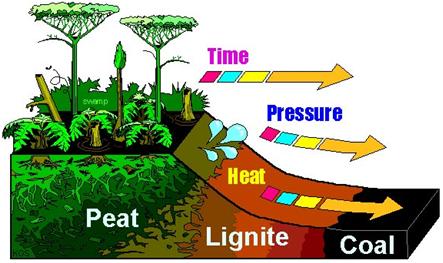